Use an amphibian bus as a tourist attraction in Rotterdam. The Splashtours amphibian bus is the only one of its kind: it is the only vehicle in the world that is certified to be driven on roads as well as be sailed on water as a seaworthy ship. This idea is the beginning of an adventure in which three entrepreneurs decided to pioneer their ambitions. Initially the possibility to repair an existing or to buy a new amphibious vehicle was examined. It turned out that these options, from both the entrepreneurs and the regulations in the field, could not meet the high standard of safety regulations. It was decided to build an new amphibious vehicle.

After a development of more than three years, closely followed by the international media, the entrepreneurs were ready to present their product to the world. On the 13th of March, 2010 the first official tour through Rotterdam was made. Splashtours is now fully European certified and approved by both the RDW as the shipping inspection. The entrepreneurs of Splashtours are proud of their papers. 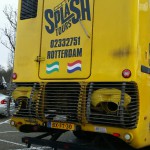 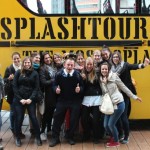 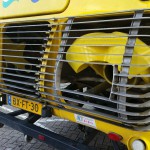 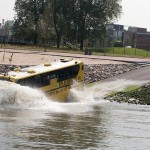 The Splashbus has a seating capacity of 43 and has been designed for comfort and safety. Not only is this Splash experience therefore thrilling, it is extremely safe as well!

The skyline of Rotterdam would not be complete without the bright yellow amphibious bus. Whether you see him drive over the Erasmusbridge or sailing on the Maas: Splashtours is at home in Rotterdam. For the people of Rotterdam is the picture of a sailing coach already become familiar. The many tourists and day trippers remain amazed when they see the amphibious bus pass.

Please Note! The Splashtours amphibian bus is no ordinary bus: Some of the features found on regular busses cannot be found on the Splashtours bus. It has no toilet facilities and offers space for one item of hand luggage per person only. Nor is the bus accessible for wheelchairs or pets.

“Driven by passion for innovation has Mulder Innova in collaboration with Splashtours a new Tour Guide-system was developed. A system that is perfectly adapted to the needs of its passengers, and so you Splashtours Splashtours an unforgettable experience can offer. “